That happened last month at Fuel50’s FuelX virtual conference, when Larry McAlister, Vice President of Global Talent at NetApp, wowed the audience as he kicked off Day 2 with a session titled Thriving Anywhere: Doing the Best Work of Your Career from your Kitchen Table.

Larry McAlister explained NetApp’s talent transformation story and why they implemented an Internal Talent Marketplace solution in three (3) chapters, and he showed the path to doing it for a lot of people who are struggling to cope with the very same issue.

Here’s how he described what happened after he arrived at NetApp, a company with 11,000 employees around the world, a little more than two years ago.

To begin with, Larry spent a few months talking to people, listening, and trying to judge what was going on with the talent management process at NetApp. That led to a sobering but clear-eyed realization. He said:

“We’re flying blind. We have no idea if our employees are engaged, we have no idea what they want to do with their careers, we really don’t know anything. And if we can’t start getting a better understanding of how talent works in this company, we’re going to lose.“

The big challenge was that NetApp was in the middle of a multi-year business transformation, moving from a traditional data storage company to a cloud company — and that had a huge impact on the talent issues too.

“How we looked at talent and how we grew talent had to change. … (I said that) the primary thing we need are high–performing teams that work together to grow and transform this business.” 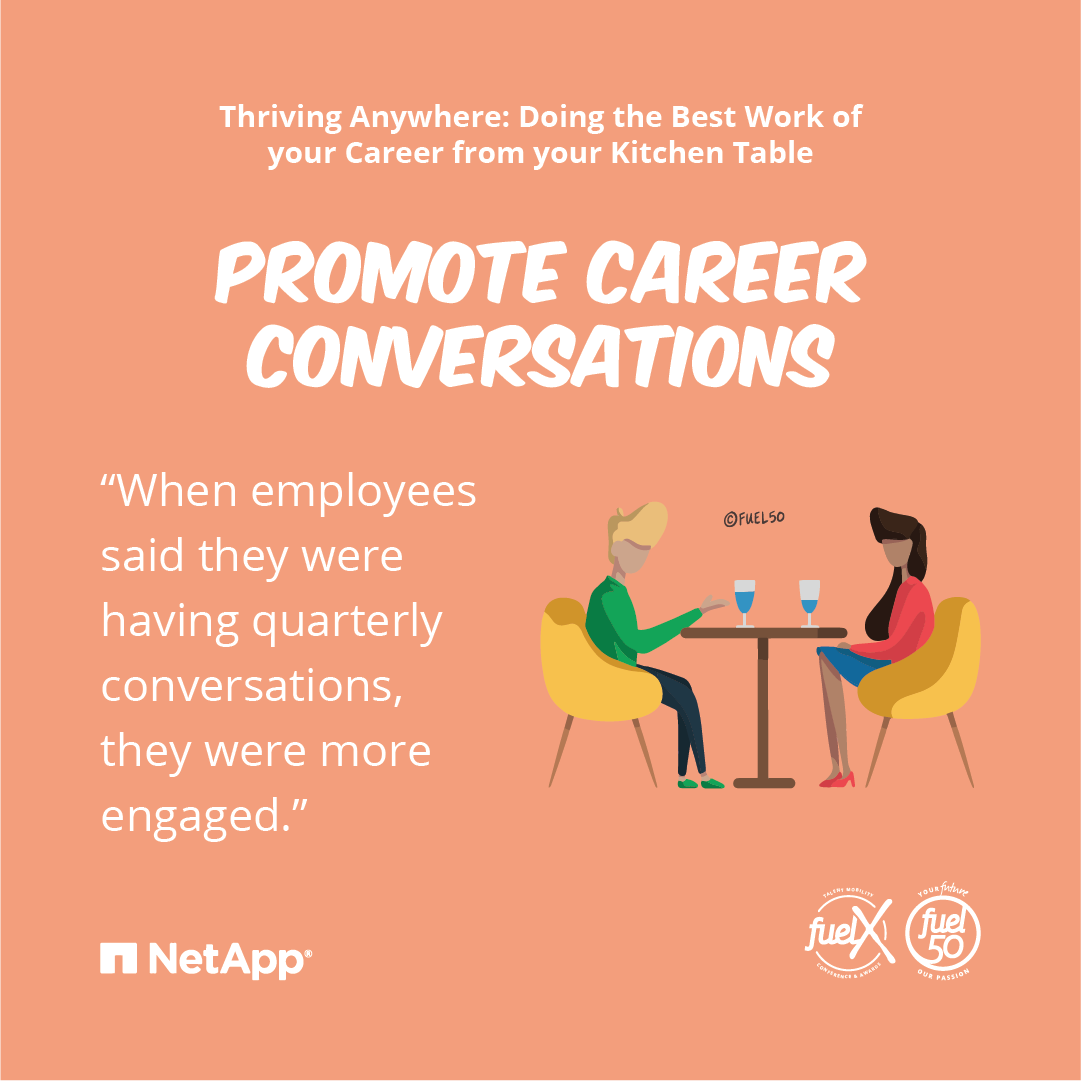 For NetApp, the big hurdle to get over was persuading people to look at their work, and how they did it, very differently. As Larry noted:

“The first year was just getting people’s brains out of the traditional mindset and going towards quarterly conversations and the pulse survey. That was the big change. And what we saw on the pulse survey was when employees said they were having quarterly conversations, they were more engaged. They were more focused on the future. So, we started seeing some data proving that (getting people to think differently) was working.”

That was a big start for NetApp, but the technology was the real key to the dramatic business transformation that would power the changes needed to move NetApp ahead. As Larry described it:

“I’ve been saying that we’re in the Golden Age of HR technology … There’s never been a better time to be an HR person if you’re thinking about technology. … I realized that artificial intelligence is the ability to see the unseen. We brought in a talent acquisition tool … that sources everyone in your database and matches them up to your job. … So, AI does something that humans would take months to do. Artificial intelligence and machine learning have changed the entire face of what we do. Once we saw that AI is at our fingertips now, we decided we had to dig into this or we were going to get leapfrogged by our competition in hiring, developing, and retaining our people.”

At that point, the next step for NetApp was to bring in vendors — 16 of them — gathering the company’s HRS group, Analytics group, IT, and HR, around the table and used scorecards to grade and rank each one.

After all the vendors made their pitch, Fuel50 was the one that the NetApp team chose to help them drive that critical transformation. 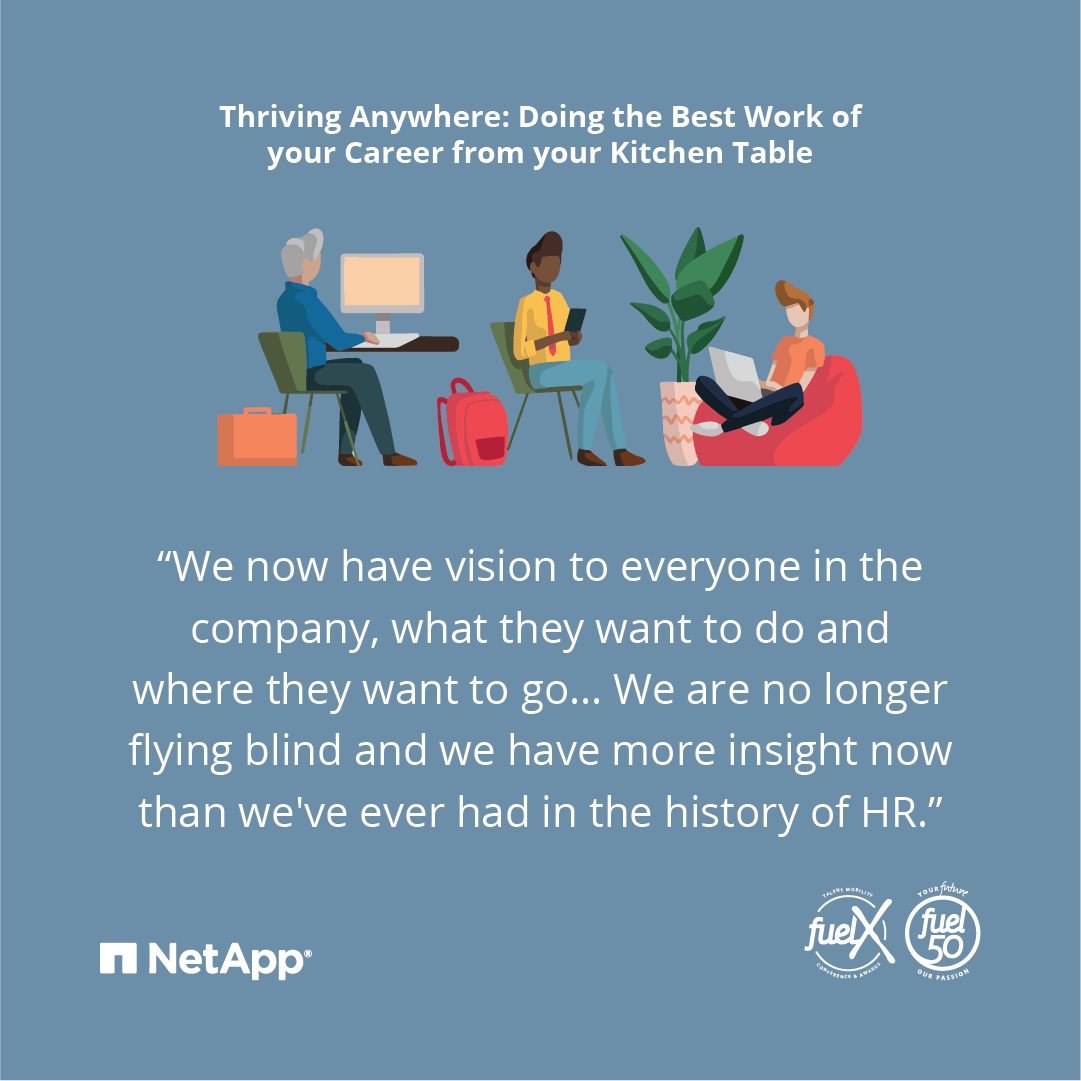 The big game-changer for Larry was the Internal Talent Marketplace that’s driven by Fuel50’s technology. The incredible number of possibilities that opened up hit Larry during the initial demonstration:

“Internal Marketplace skills are the new currency. … And Fuel50, as a platform, opens the door to so much growth more than you can imagine … What really blew me away … is when they showed one screenshot about, ‘Hey, I’m in this job, and I wouldn’t be in this job in five years’. And it says, ‘Here are the next three real jobs inside this company you should consider” …  That was like mind–blowing, right? That’s what AI can do. … and, the Fuel50 platform has literally made our dreams come true.”

NetApp also decided, as many companies do, to give a name to their Fuel50 system that is both meaningful for their own employees AND helps everyone in the organization to better embrace the Internal Talent Mobility and Internal Talent Marketplace process.

“What we wanted is to shift everyone’s brain away from how they thought about careers before to how it is going to be. And the lever for that was Fuel50.  … So internally, we called Fuel50 Mosaic, because we really feel it gives you so many different avenues to grow and so many different ways to connect to growth. We thought Mosaic … really represented that.“

Larry and his team at NetApp have only been live with Mosaic (Fuel50) for a few months, but they immediately could see a change in thinking throughout the company as a result.

“We broke the benchmark of what we expected … (it) was to have 30% of employees try it out in the first month, and we had 30% in the first week and 50% of our employees in the first month — which is awesome. Half of the company has already been inside of Mosaic, trying different things, understanding it, asking questions …“

Larry McAlister had much more to say about the talent transformation at NetApp — and you can see his entire presentation from the FuelX conference here — as well as how employees are taking to the new Internal Talent Marketplace on their Mosaic system powered by Fuel50. But here’s how he summarized where things stand during the early stage they’re in right now:

“I remember many years ago … when we were thinking about an Internal Talent Marketplace, it was on paper … And to see this come alive today, inside the Fuel50 platform. has literally made our dreams come true. It’s been an amazing experience. …

Here’s the value of an AI-driven platform to our employees … every single person is an individual and they all have their own growth plan, not a manufactured artificial growth plan that fits everybody. They can connect to learning opportunities and to other people in the organization. For teams, you now know everything that’s going on in the company. You now know that we have 11,000 employees and we can find out what do they want to do, and where do they want to grow?”

“Moving and climbing different ways around your career, and around Mosaic, and around your growth, is what we are encouraging people to do — to get smarter at something, as our new president of the company says. You know, I want a company full of learners, not a company full of knowers, so constantly learning is good and it’s all made possible by the Internal Talent Marketplace with Fuel50.” 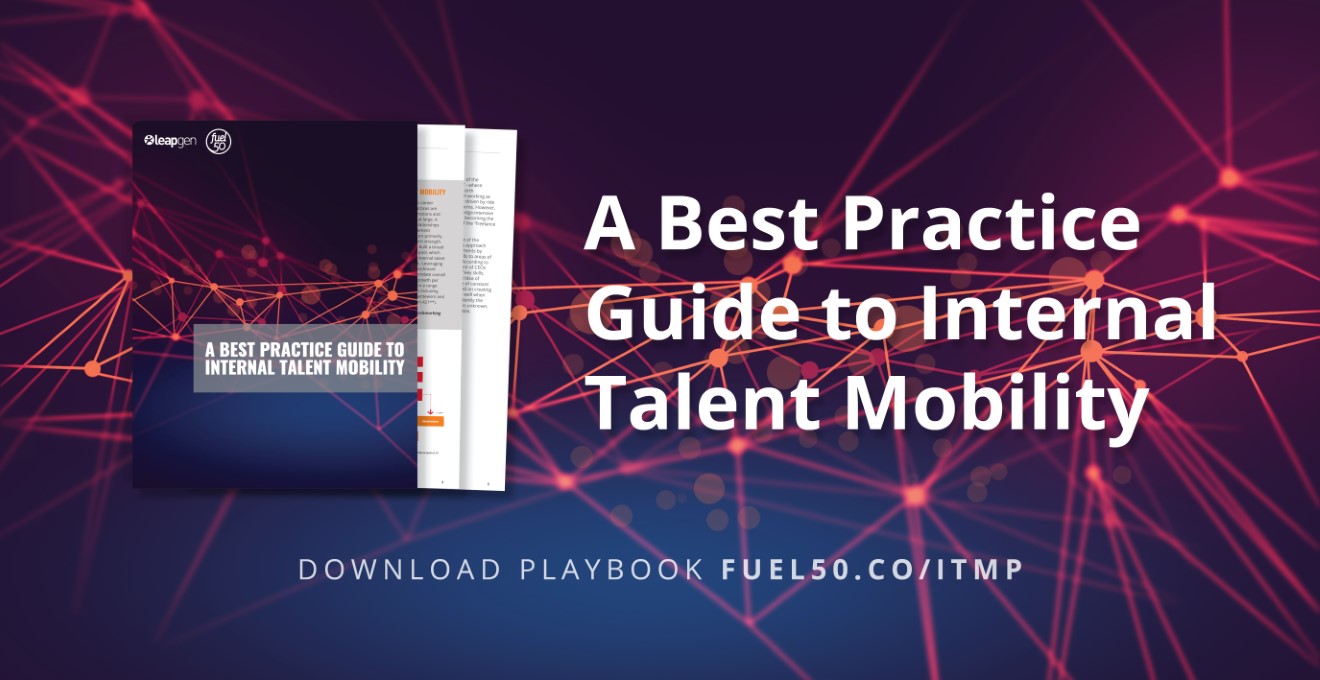 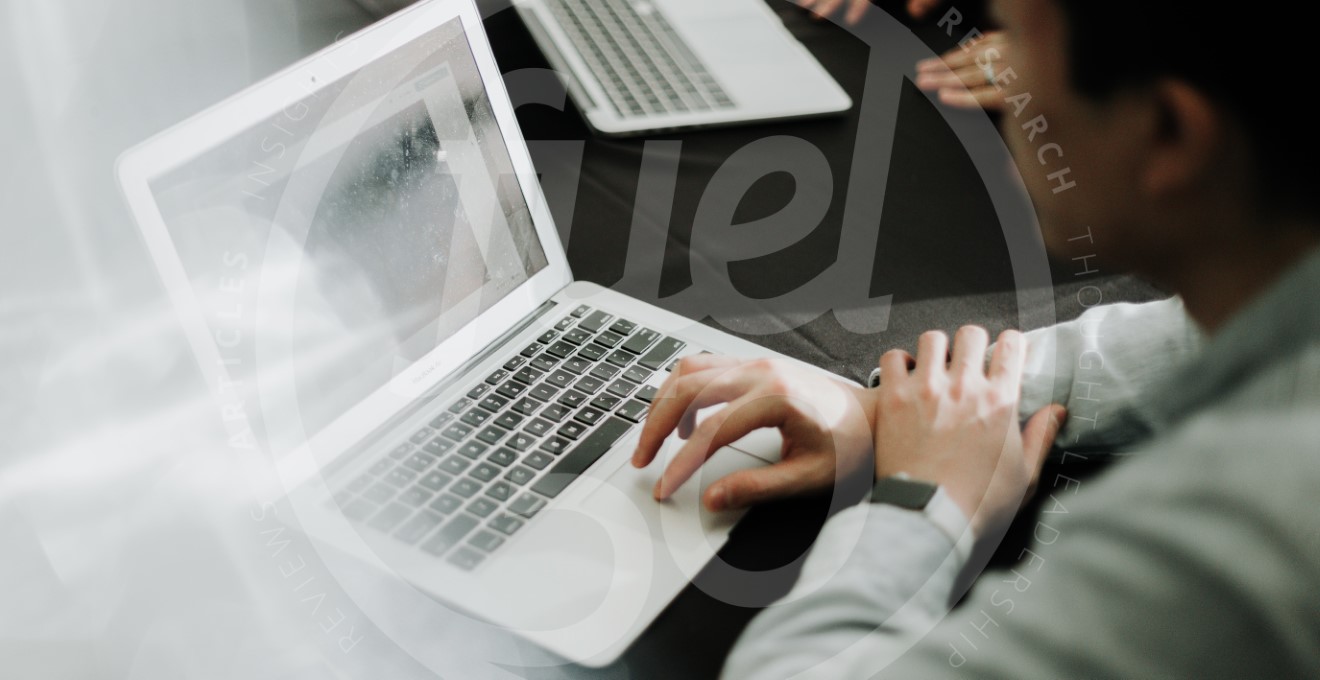 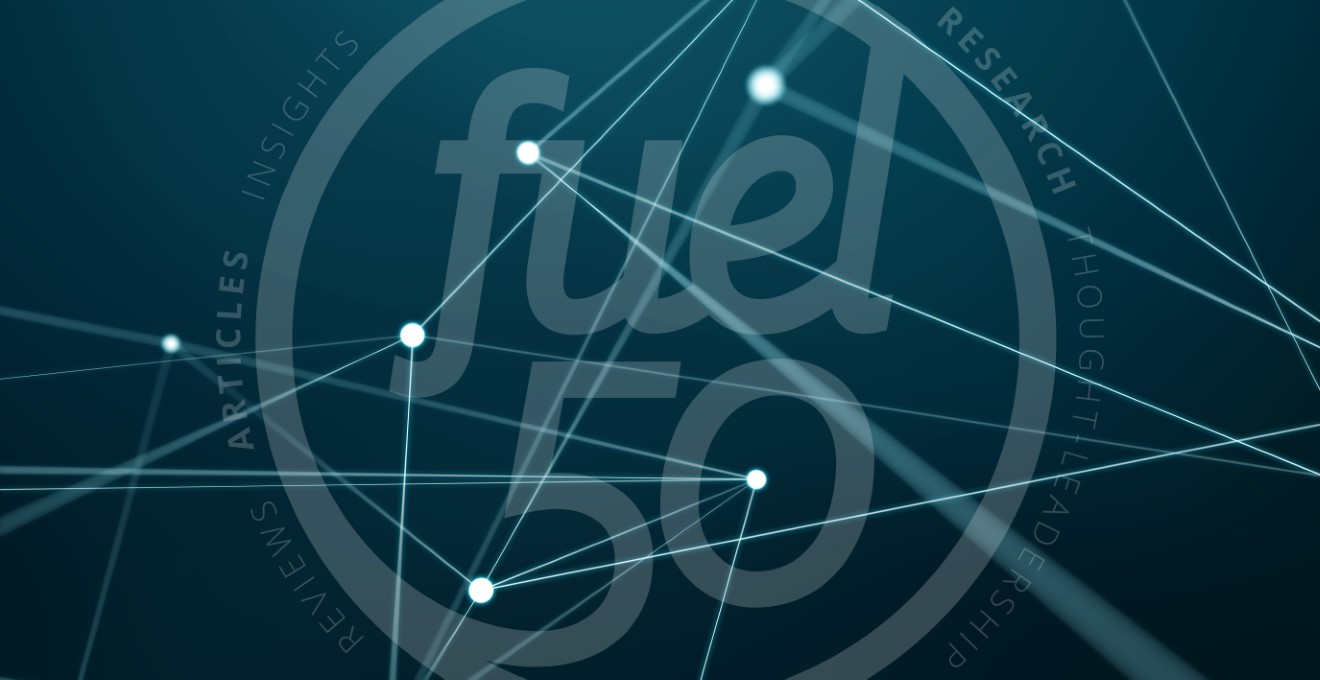